The founders of the United Nations of Atocha recreate the ¡Extran Hero! chalk mural that has been displayed at J and J Books and Coffee in Madrid for the past five years!

It’s been five years. The world has changed and I have changed. I’ve experienced immense joys and life milestones as well as pain and loss. But in these years my desire to return to Madrid has remained. And now I am going back.

It’s time for Extran Hero to return. Time to embrace this life and its infinite possibilities. Time to have courage.

And time to have a fantastic trip. ¡Hasta pronto, España!

¡Extran Hero! makes an appearance at the Innovation Lab of TEDxFulbright at the U.S. Chamber of Commerce in Washington, D.C.
This was a great event of reconnecting with fellow Fulbrighters in Madrid, Spain from 2011-2013, as well as making new friends, exchanging ideas, and exploring a new city. I’m already looking forward to next year’s event!

http://youtube.googleapis.com/v/xWi33gHzByg&source=uds
As the months go by since returning to New York, I think about my two years in Spain, the experience I had, what it all meant, and how it will play out into the future.  Returning to the rhythms of life in New York City, it’s easy to feel as though my time abroad was one huge dream, a completely separate way of life.
When I received the letter saying I was accepted on a Fulbright grant to go to Spain, I was very excited about the opportunity, but nervous about leaving my life back home behind. I had certain expectations: I would interact with new people in a foreign culture, sure, but I had no idea how it would manifest itself, which relationships would emerge, what I would learn and discover. In many ways, when I boarded the plane to go to Spain, I took a leap of faith.
Of course, the events that unfolded from this point onward were exciting. From the moment I met my coordinator at the airport, to making friends at orientation, to meeting my host family and students, everything was completely new and out of my control. What I did have in my control, above anything else, was how I would give to this new community, and how actively I would participate. When I put myself in this new environment, I had to draw upon my own schooling and life to create meaningful contributions
The last thing I would have expected was that I would end up staying in Spain a second year. Though I had doubts when I made the commitment to return, I took the ball and ran with it. The second year was bigger and better than before, and returning with more experience and knowledge deepened my time at the school, leading to new and unexpected surprises. By the time this year was done, I felt incredibly fulfilled by the program I helped to create, the hundreds of people I was fortunate enough to meet, and the challenges I had accepted and worked through. It was difficult to leave behind, but my work was done and the time had come.
This video serves as a tribute to all the beautiful people I met during my time in Spain. Had I not taken this journey, my life would not have been enriched by meeting each and every one of you. I am glad our paths crossed, and that we shared these great moments with one another. I know that, wherever we go in life, we’ll remember being an ¡Extran Hero! 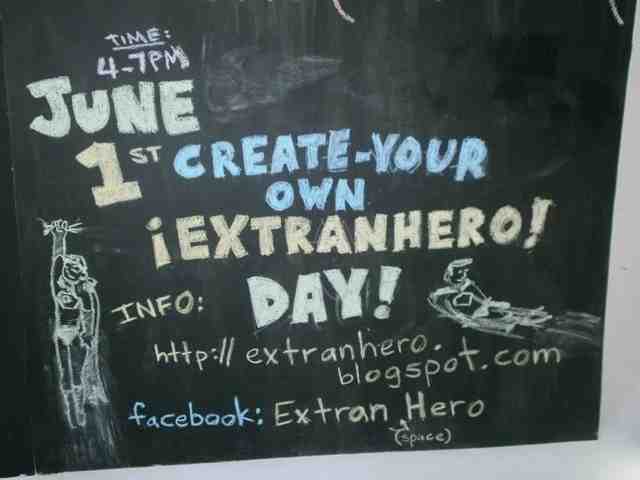 Last year a group of Extran Heroes got together at a cafe and shared their wacky mishaps, adventures, and escapades using paper and markers. This year, as with most things during this second go-round in Spain, let’s do it bigger and better.
All art invited to participate in this collaborative art project by creating their very own ¡Extran Hero! entry. We all have wild experiences and stories to share from our many months overseas, so come share them with readers, here in Spain and back home. Draw your very own ¡Extran Hero! entry to be featured in a special section on the blog.
No art skills required, though of course a plus. All materials will be supplied, but please bring any you would like to use. Come one, come all!
Date:  Saturday, June 1st
Time:  4 to 7 p.m.
Place: J and J Books and Coffee
calle Espíritu Santo 47
28004 Madrid, Spain
Visit the Create-Your-Own ¡Extran Hero! Day! Page in the tabs at the top of this blog to see photos from last year’s event, to give you an idea of what to expect.
If you participated in last year’s event, please do come again and share the wisdom acquired from your second year. And if this is your first time, we welcome fresh creativity from a new cast of characters!
Don’t let any lack of drawing skills stop you from participating! It doesn’t matter how much art you put onto the page, so long as it’s your original work. 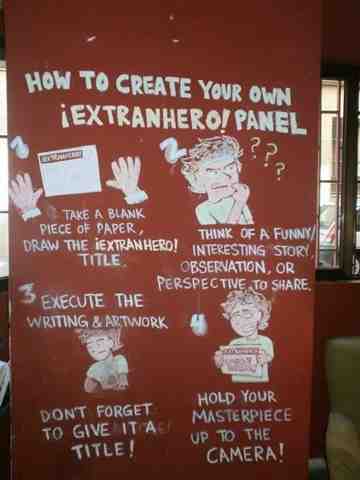 DIGITAL SUBMISSIONS also accepted!
…from those in Spain, the United States, and anywhere else. Here are the guidelines:
– Create an original ¡Extran Hero! entry, in more or less the same format as the online comics: the ¡Extran Hero! text in the upper-left hand corner, your title in the upper-right (no need to worry about numbering).
– Draw in an unlined spiral notebook or on a white piece of paper and take two photos:
1) a horizontal photo of the page against a backdrop in a well-lit place, preferably outdoors.
2) a photo you holding up your submission
– Send to michaelyoung21@gmail.com
Be sure to ‘Like’ the Facebook Page!
https://www.facebook.com/extranhero 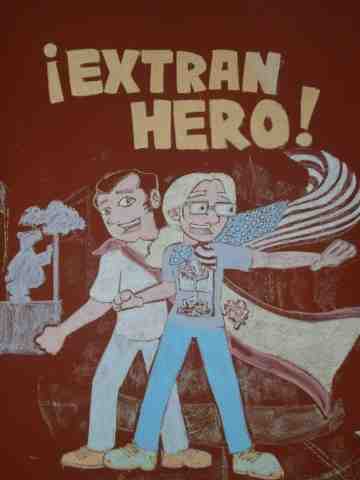 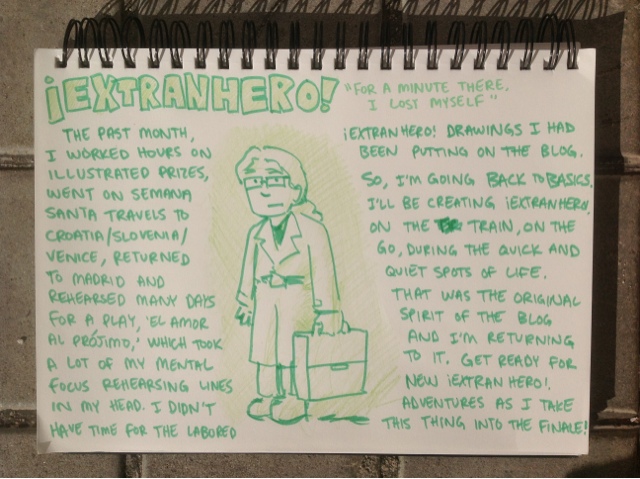